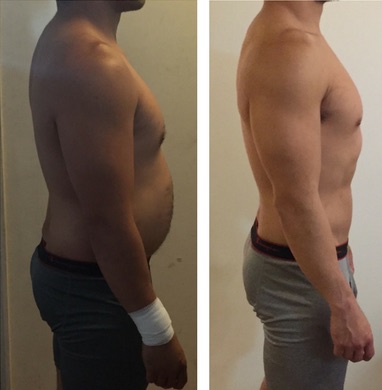 "After my surgery, the goal was really to get back into training and focus on my health and longevity. Over the last year though I've seen a huge improvement in my shoulder stability and overall core strength."

Coach Coming Back From Wrist Surgery

Erwin is an experienced coach and prior to a recent wrist surgery, a hard charging CrossFit athlete, intent on making it to regionals.  His surgery changed his perspective though and he wanted to take a step back to focus on improving his body composition,  his health, his wrist function and maybe most of all, get back to having fun with training again.

Initially, we worked around his movement limitations due to his surgery, but eventually helped restore range of motion in his wrist and got him back to doing some of the movements he loves like snatching and muscle ups.

“My program included some old school things I hadn’t done in a long time… and some new stuff that I had never even experimented with.”

Even when his movement was limited, we were able to get creative with his training and design a program that improved the way he looked and felt, as well as safely and effectively restored function to his wrist.  Ultimately, Erwin ended up training less and getting leaner than he’d been in a long time.

Wait… work out less AND get leaner?

Yup!  We replaced his old competitive CrossFit training with a program more aligned to his health and body comp goals.  With targeted training and consistent nutrition he experienced dramatic improvements.

The right tool for the job is always more effective.

The same applies with his nutrition.  We barely reduced his intake to get the fat to start dropping.  In fact, we actually increased how much he ate when we first started.  Don’t believe me?  Take a look.

Erwin is a testament to what can happen if you put your head down and execute well on a plan.  He’s back to having fun with his training and lifting heavier than ever.  He’s lost a bunch of fat, but found a sustainable way to eat where he can still enjoy the foods he likes AND keep the body comp he wants.  If you want to hear a bit from Erwin himself, take a look at the short video below.